What is Precise Point Positioning (PPP)?

PPP is a positioning technique that removes or models GNSS system errors to provide a high level of position accuracy from a single receiver. A PPP solution depends on GNSS satellite clock and orbit corrections, generated from a network of global reference stations. Once the corrections are calculated, they are delivered to the end user via satellite or over the Internet. These corrections are used by the receiver, resulting in decimetre-level or better positioning with no base station required.

What is the accuracy of PPP?

PPP delivers accuracy up to 3 centimetres. A typical PPP solution requires a period of time to converge to decimetre accuracy in order to resolve any local biases such as the atmospheric conditions, multipath environment and satellite geometry. The actual accuracy achieved and the convergence time required is dependent on the quality of the corrections and how they are applied in the receiver.

Similar in structure to an SBAS system, a PPP system provides corrections to a receiver to increase position accuracy. However, PPP systems typically provide a greater level of accuracy and charge a fee to access the corrections. PPP systems also allow a single correction stream to be used worldwide, while SBAS systems are regional. A typical PPP system is shown in Figure 43. 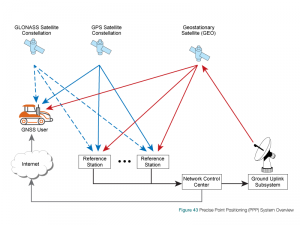 The main error sources for PPP are mitigated in following ways:

External Error Correction Data: This includes satellite orbit and clock corrections. In the case of TerraStar service, the corrections generated are broadcast for end-users by Inmarsat telecommunication satellites.

PPP Filter Algorithms:  An Extended Kalman Filter (EKF) is used for the PPP estimation. Position, receiver clock error, tropospheric delay and carrier-phase ambiguities are estimated EKF states. EKF minimizes noise in the system and enables estimating position with centimetrelevel accuracy. The estimates for the EKF states are improved with successive GNSS measurements, until they converge to stable and accurate values. The typical convergence time of PPP to under 10 cm horizontal error is between 20 and 40 minutes, but it depends on the number of satellites available, satellite geometry, quality of the correction products, receiver multipath environment and atmospheric conditions.

There are several providers of PPP services, including, VERIPOS, TerraStar, OmniSTAR and StarFire. PPP service providers operate a network of ground reference stations to collect correction data for the different signals broadcast by each satellite. The corrections calculated from this data are broadcast from geostationary satellites to the receivers of subscribed users.

More information about PPP is also available in the Advanced GNSS Positioning Solution article in the 2014 Velocity magazine. This magazine is available on line at: http://www.novatel.com/technology-in-action/velocity/