The atomic clocks in the GNSS satellites are very accurate, but they do drift a small amount. Unfortunately, a small inaccuracy in the satellite clock results in a significant error in the position calculated by the receiver. For example, 10 nanoseconds of clock error results in 3 metres of position error.

The clock on the satellite is monitored by the GNSS ground control system and compared to the even more accurate clock used in the ground control system. In the downlink data, the satellite provides the user with an estimate of its clock offset. Typically, the estimate has an accuracy of about ±2 metres, although the accuracy can vary between different GNSS systems. To obtain a more accurate position, the GNSS receiver needs to compensate for the clock error.

One way of compensating for satellite orbit errors is to download precise ephemeris information from an SBAS system or PPP service provider. SBAS and PPP are discussed further in Chapter 5.

The ionosphere is the layer of atmosphere between 80 km and 600 km above the earth. This layer contains electrically charged particles called ions. These ions delay the satellite signals and can cause a significant amount of satellite position error (Typically ±5 metres, but can be more during periods of high ionospheric activity).

Ionospheric delay varies with solar activity, time of year, season, time of day and location. This makes it very difficult to predict how much ionospheric delay is impacting the calculated position.

Ionospheric delay also varies based on the radio frequency of the signal passing through the ionosphere. GNSS receivers that can receive more than one GNSS signal, L1 and L2 for example, can use this to their advantage. By comparing the measurements for L1 to the measurements for L2, the receiver can determine the amount of ionospheric delay and remove this error from the calculated position.

Ionospheric conditions are very similar within a local area, so the base station and rover receivers experience very similar delay. This allows Differential GNSS and RTK systems to compensate for ionospheric delay.

The troposphere is the layer of atmosphere closest to the surface of the Earth.

Variations in tropospheric delay are caused by the changing humidity, temperature and atmospheric pressure in the troposphere.

GNSS receivers can also use tropospheric models to estimate the amount of error caused by tropospheric delay. 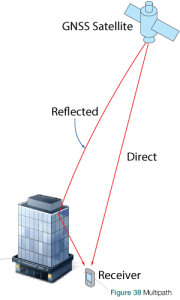 The simplest way to reduce multipath errors is to place the GNSS antenna in a location that is away from the reflective surface. When this is not possible, the GNSS receiver and antenna must deal with the multipath signals.

This chapter has described the errors sources that cause inaccuracies in the calculation of position. In Chapter 5, we will describe the methods that GNSS receivers use to mitigate these errors and provide a more accurate position.