India is in the process of launching its own regional navigation satellite system to provide coverage for India and the surrounding regions. The IRNSS system will consist of seven satellites, three of them in geostationary orbits and four in inclined geosynchronous orbits.3 The system will provide a position accuracy of better than 10 metres throughout India and better than 20 metres for the area surrounding India by 1500 km.

QZSS is a four satellite system that will provide regional communication services and positioning information for the mobile environment. One of the four satellites was launched in 2010. The focus of this system is for the Japan region, but it will provide service to the Asia-Oceania region.

QZSS will provide limited accuracy in standalone mode, so it is viewed as a GPS augmentation service. The QZSS satellites use the same frequencies as GPS and have clocks that are synchronized with GPS time. This allows the QZSS satellites to be used as if they were additional GPS satellites. QZSS satellites also broadcast an SBAS compatible signal and a high-precision signal at E6.

Three of the QZSS satellites will be placed in a periodic Quasi-Zenith Orbit (QSO). These orbits will allow the satellites to “dwell” over Japan for more than 12 hours a day, at an elevation above 70° (meaning they appear almost overhead most of the time).

In the future, Japan intends to expand the QZSS system to a seven satellite system. 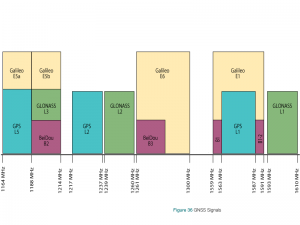 Now that you know more about global navigation satellite systems, we will discuss advanced GNSS concepts in the following chapters.