GPS was the first GNSS system. GPS (or NAVSTAR, as it is officially called) satellites were first launched in the late 1970sand early 1980s for the US Department of Defense. Since that time, several generations (referred to as “Blocks”) of GPS satellites have been launched. Initially, GPS was available only for military use but in 1983, a decision was made to extend GPS to civilian use. A GPS satellite is depicted in Figure 27. 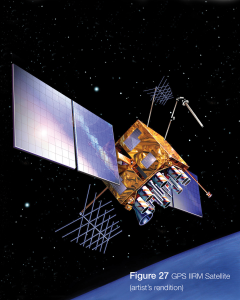 The GPS space segment is summarized in Table 2. The orbit period of each satellite is approximately 12 hours, so this provides a GPS receiver with at least six satellites in view from any point on Earth, under open-sky conditions.

A GPS satellite orbit is illustrated in Figure 28. 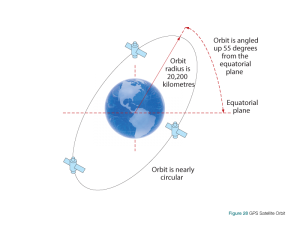 Table 3 provides further information on GPS signals. GPS signals are based on CDMA (Code Division Multiple Access) technology, which we discussed in Chapter 2. 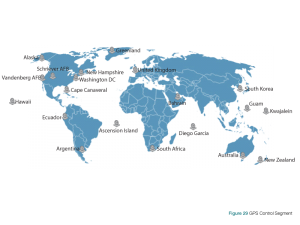 There are 16 monitor stations located throughout the world; six from the US Air Force and ten from the NGA (National Geospatial Intelligence Agency, also part of the United States Department of Defense). The monitor stations track the satellites via their broadcast signals, which contain satellite ephemeris data, ranging signals, clock data and almanac data. These signals are passed to the master control station where the ephemerides are recalculated. The resulting ephemerides and timing corrections are transmitted back up to the satellites through data up-loading stations.

GPS reached Fully Operational Capability (FOC) in 1995. In 2000, a project was initiated to modernize the GPS space and ground segments, to take advantage of new technologies and user requirements.

The modernized GPS satellites (Block IIR-M and later) are transmitting a new civilian signal, designated L2C, ensuring the accessibility of two civilian codes. L2C is easier for the user segment to track and it delivers improved navigation accuracy. It also provides the ability to directly measure and remove the ionospheric delay error for a particular satellite, using the civilian signals on both L1 and L2. The L2C signal is expected to be available from 24 satellites by 2018.

The benefits of the L5 signal include meeting the requirements for critical safety-of-life applications such as that needed for civil aviation and providing:

The L5 signal is expected to be available from 24 satellites by 2021.

A fourth civilian GPS signal, L1C, is planned for the next generation of GPS satellites, Block III. L1C will be backward compatible with L1 and will provide greater civilian interoperability with Galileo. The Japanese QZSS, Indian IRNSS and Chinese BeiDou also plan to broadcast L1C, making it a future standard for international interoperability.

L1C features a new modulation scheme that will improve GPS reception in cities and other challenging environments. It is expected that the first Block III satellites will be launched in 2016 and that there will be 24 satellites broadcasting L1C by 2026.