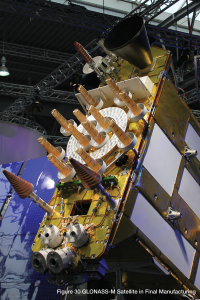 The first GLONASS satellite was launched in 1982 and the system was declared fully operational in 1993. After a period where GLONASS performance declined, Russia committed to bringing the system up to the required minimum of 18 active satellites. Currently, GLONASS has a full deployment of 24 satellites in the constellation.

GLONASS satellites have evolved since the first ones were launched. The latest generation, GLONASS-M, is shown in Figure 30 being readied for launch.

The GLONASS constellation provides visibility to a variable number of satellites, depending on your location. A minimum of four satellites in view allows a GLONASS receiver to compute its position in three dimensions and to synchronize with system time.

The GLONASS space segment is summarized in Table 4.

The GLONASS space segment consists of 24 satellites, in three orbital planes, with eight satellites per plane.

The GLONASS constellation geometry repeats about once every eight days. The orbit period of each satellite is approximately 8/17 of a sidereal1 day so that, after eight sidereal days, the GLONASS satellites have completed exactly 17 orbital revolutions.

Each orbital plane contains eight equally spaced satellites. One of the satellites will be at the same spot in the sky at the same sidereal time each day.

The satellites are placed into nominally circular orbits with target inclinations of 64.8 degrees and an orbital radius of 19,140 km, about 1,060 km lower than GPS satellites.

The GLONASS satellite signal identifies the satellite and includes: 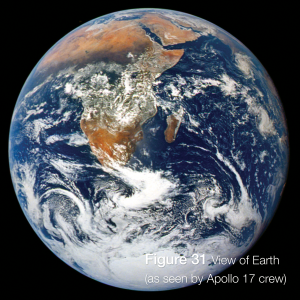 “The Earth was absolutely round . . . I never knew what the word 'round' meant until I saw Earth from space.” Alexei Leonov, Soviet astronaut, talking about his historic 1985 spacewalk.

GLONASS signals have the same polarization (orientation of the electromagnetic waves) as GPS signals, and have comparable signal strength. 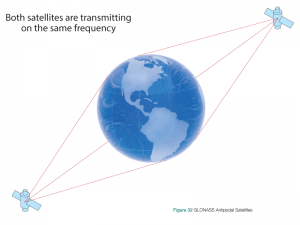 As the current GLONASS-M satellites reach the end of their service life, they will be replaced with next generation GLONASS-K satellites. The new satellites will provide the GLONASS system with new GNSS signals.

The first block of GLONASS-K satellites (GLONASS-K1) will broadcast the new civil signal, designated L3, centered at 1202.025 MHz. Unlike the existing GLONASS signals, L3 is based on CDMA which will ease interoperability with GPS and Galileo.

The first GLONASS-K1 satellite was launched in February 2011.

The second block of GLONASS-K satellites (GLONASS-K2) adds two more CDMA based signals broadcast at the L1 and L2 frequencies. The exiting FDMA L1 and L2 signals will continue to be broadcast as well to support legacy receivers. GLONASS-K2 satellites are planned to be launched starting in 2015.

The third block of GLONASS-K satellites (GLONASS-KM) will add an L5 signal to the GLONASS system.