If we knew the exact position of three satellites and the exact range to each of them, we would geometrically be able to determine our location. We have suggested that we need ranges to four satellites to determine position. In this section, we will explain why this is so, and how GNSS positioning actually works.

For each satellite being tracked, the receiver calculates how long the satellite signal took to reach it, as follows:

Multiplying this propagation time by the speed of light gives the distance to the satellite.

For each satellite being tracked, the receiver now knows where the satellite was at the time of transmission (because the satellite broadcasts its orbit ephemerides) and it has determined the distance to the satellite when it was there. Using trilateration, a method of geometrically determining the position of an object, in a manner similar to triangulation, the receiver calculates its position.s 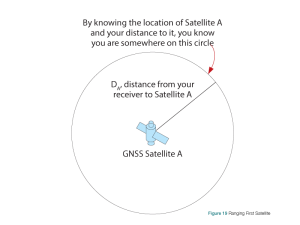 To help us understand trilateration, we’ll present the technique in two dimensions. The receiver calculates its range to Satellite A. As we mentioned, it does this by determining the amount of time it took for the signal from Satellite A to arrive at the receiver, and multiplying this time by the speed of light. Satellite A communicated its location (determined from the satellite orbit ephemerides and time) to the receiver, so the receiver knows it is somewhere on a circle with radius equal to the range and centered at the location of Satellite A, as illustrated in Figure 19. In three dimensions, we would show ranges as spheres, not circles.

The receiver also determines its range to a second satellite, Satellite B. Now the receiver knows it is at the intersection of two circles, at either Position 1 or 2, as shown in Figure 20. 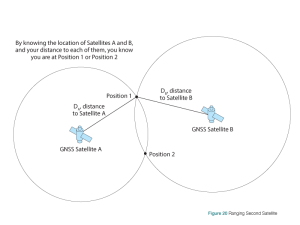 You may be tempted to conclude that ranging to a third satellite would be required to resolve your location to Position 1 or Position 2. But one of the positions can most often be eliminated as not feasible because, for example, it is in space or in the middle of the Earth. You might also be tempted to extend our illustration to three dimensions and suggest that only three ranges are needed for positioning.

But as we discussed earlier, four ranges are necessary. Why is this? 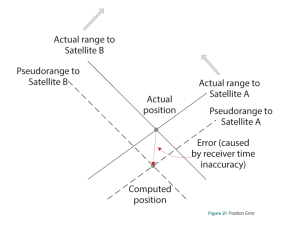 It turns out that receiver clocks are not nearly as accurate as the clocks on board the satellites. Most are based on quartz crystals. Remember, we said these clocks were accurate to only about 5 parts per million. If we multiply this by the speed of light, it will result in an accuracy of ±1500 metres. When we determine the range to two satellites, our computed position will be out by an amount proportional to the inaccuracy in our receiver clock, as illustrated in Figure 21.

We want to determine our actual position but, as shown in Figure 21, the receiver time inaccuracy causes range errors that result in position errors. The receiver knows there is an error, it just does not know the size of the error. If we now compute the range to a third satellite, it will not intersect the computed position, as shown in Figure 22.

Now for one of the ingenious techniques used in GNSS positioning. 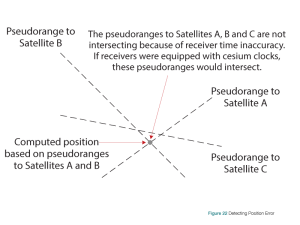 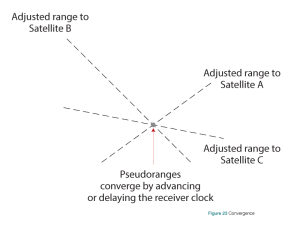 The incredible accuracy of the satellite clock has now been “transferred” to the receiver clock, eliminating the receiver clock error in the position determination. The receiver now has both an accurate position and a very, very accurate time. This presents opportunities for a broad range of applications, as we shall discuss.

The above technique shows how, in a two-dimensional representation, receiver time inaccuracy can be eliminated and position determined using ranges to three satellites. When we extend this technique to three dimensions, we need to add a range to a fourth satellite. This is the reason why line-of-sight to a minimum of four GNSS satellites is needed to determine position.

A GNSS receiver calculates position based on data received from satellites. However, there are many sources of errors that, if left uncorrected, cause the position calculation to be inaccurate. Some of these errors, such as those caused by the refraction of the satellite signal as it passes through the ionosphere and troposphere, are due to natural causes, and some, such as a government’s Selective Availability (SA) methods, are introduced on purpose.

The type of error and how it is mitigated is essential to calculating precise position, as the level of precision is only useful to the extent that the measurement can be trusted. This book dedicates three chapters to this important topic. Chapter 4 presents key sources of GNSS error while Chapter 5 discusses methods of error resolution and impact on accuracy and other performance factors. Chapter 8 presents the equipment and network infrastructure necessary to generate and receive correction data.

The geometric arrangement of satellites, as they are presented to the receiver, affects the accuracy of position and time calculations. Receivers will ideally be designed to use signals from available satellites in a manner that minimizes this so called “dilution of precision.” 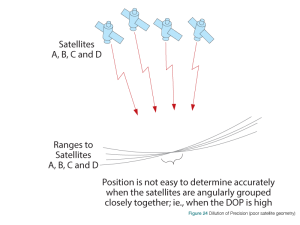 To illustrate DOP, consider the example shown in Figure 24, where the satellites being tracked are clustered in a small region of the sky. As you can see, it is difficult to determine where the ranges intersect. Position is “spread” over the area of range intersections, an area which is enlarged by range inaccuracies (which can be viewed as a “thickening” of the range lines).

As shown in Figure 25, the addition of a range measurement to a satellite that is angularly separated from the cluster allows us to determine a fix more precisely. 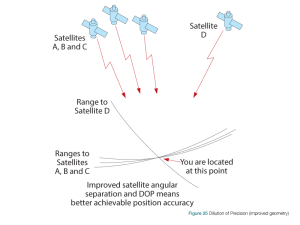 Although it is calculated using complex statistical methods, we can say the following about DOP: DOP is a numerical representation of satellite geometry, and it is dependent on the locations of satellites that are visible to the receiver.

The smaller the value of DOP, the more precise the result of the time or position calculation. The relationship is shown in the following formula:

DOP can be expressed as a number of separate elements that define the DOP for a particular type of measurement, for example, HDOP (Horizontal Dilution of Precision), VDOP (Vertical Dilution of Precision), and PDOP (Position Dilution of Precision). These factors are mathematically related. In some cases, for example when satellites are low in the sky, HDOP is low and it will therefore be possible to get a good to excellent determination of horizontal position (latitude and longitude), but VDOP may only be adequate for a moderate altitude determination. Similarly, when satellites are clustered high in the sky, VDOP is better than HDOP.

In Canada, and in other countries at high latitude, GNSS satellites are lower in the sky and achieving optimal DOP for some applications, particularly where good VDOP is required, is sometimes a challenge.

Applications where the available satellites are low on the horizon or angularly clustered, such as those in urban environments or in deep open-pit mining, may expose users to the pitfalls of DOP. If you know your application will have obstructed conditions, you may want to use a mission planning tool to determine the ideal time—the time with the ideal DOP.