GNSS signals pass through the near-vacuum of space, then through the various layers of the atmosphere to the earth, as illustrated in Figure 15. 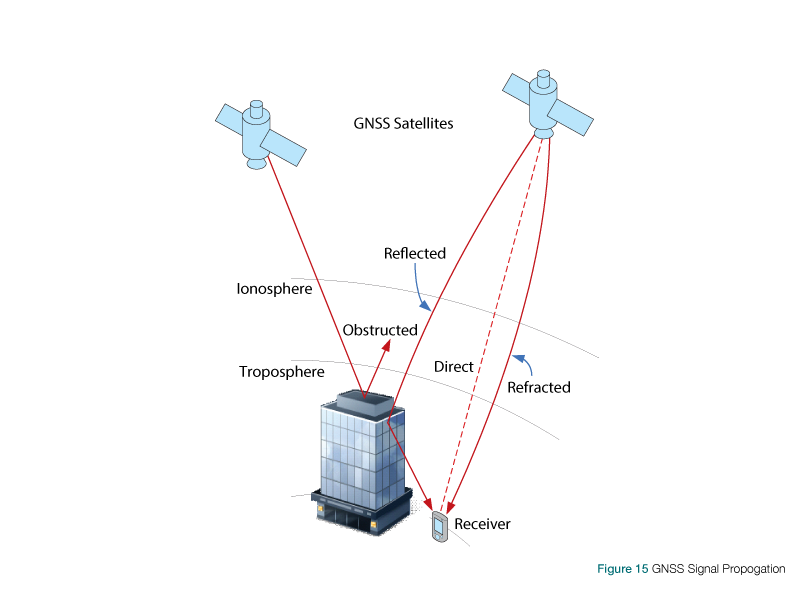 The layer of the atmosphere that most influences the transmission of GPS (and other GNSS) signals is the ionosphere, the layer 70 to 1,000 km above the earth’s surface. Ultraviolet rays from the sun ionize gas molecules in this layer, releasing free electrons. These electrons influence electromagnetic wave propagation, including GPS satellite signal broadcasts. Ionospheric delays are frequency dependent so by calculating the range using both L1 and L2, the effect of the ionosphere can be virtually eliminated by the receiver.

Some of the signal energy transmitted by the satellite is reflected on the way to the receiver. This phenomenon is referred to as “multipath propagation.” These reflected signals are delayed from the direct signal and, if they are strong enough, can interfere with the desired signal. Techniques have been developed whereby the receiver only considers the earliest-arriving signals and ignores multipath signals, which arrive later. In the early days of GPS, most errors came from ionospheric and tropospheric delays, but now more attention is being made to multipath effects, in the interests of continually improving GNSS performance.